When a Bug Hits the Market

January 2020 started off well enough with both U.S. and Emerging Markets taking turns as the top performer among equities, both up ~3% year-to-date as of January 17th. Then, news broke that the U.S. was screening all passengers traveling from the city of Wuhan, the largest city in the Hubei province of China, and later all travelers arriving from China for a SARS-like illness called coronavirus. By January 23rd, the first U.S. case of the coronavirus was confirmed in Washington state, and the city of Wuhan, a city of over 10 million people, was quarantined. All told, travel bans impacted a total of about 50 million people in China. Last week, major airliners suspended all flights into China through April. Markets took notice and sold off, especially within Emerging Markets. U.S. equities ended the month near where they started while Emerging Markets declined 4.7%.

In the World Economic Forum’s 2020 Global Risks Report, survey participants rated a number of risks by both their potential impact and likelihood. Infectious diseases made the top 10 based on potential impact but ranked lower on its likelihood to occur. Over the last 20 years, progress has been made in dealing with these outbreaks due to lessons learned from the Ebola, SARS, and Zika pandemics. Indeed, China’s response to the current situation far exceeds their actions in dealing with SARS back in 2002 when it was reluctant to admit the scope of the problem. In 2002, the Chinese government waited 4 months to report the new infection to the World Health Organization. In 2020, China had posted the genetic blueprint for the virus online within 2 weeks. While the anticipated timeline for the vaccine is likely too slow (in all likelihood, cases will have peaked long before it is ready for mass distribution), the global coordination of scientists and government agencies is impressive.

What does it mean for economic growth and markets?

While the sample set of global infectious diseases is (thankfully) limited, the SARS experience in 2003 seems most similar, and suggests that we could see markets bottom on the news of a peak in the number of new cases. As of now, the virus appears to be spreading faster but appears to be less lethal than SARS. However, it’s uncertain whether the velocity of new cases is being caused by a keener awareness of the virus, (and so we have better reporting) or if it’s actually spreading faster. In 2003, the SARS epidemic subtracted about 1% of growth from China’s GDP for the year (concentrated in Q2 2003 but rebounding strongly in Q3 2003). While we continue to analyze developments related to the outbreak, we believe the SARS experience is a reasonable roadmap. Nevertheless, there are several risks (positive and negative) to this view:

How are we positioned?

We are maintaining our allocation to Emerging Market equities and prefer to do so via active managers who are positioned in more consumer-oriented rather than trade-oriented, companies. These managers prefer higher exposure to companies within the healthcare and consumer sectors while eschewing those in the globally-exposed industrial sectors. While the coronavirus was not part of our thesis for investing with these managers, the impact of the virus may be a boon to their relative performance.

We think now is a good time to remind ourselves and clients of the two questions that the World Economic Forum report put to its respondents: impact and likelihood. While investors may be underestimating the virus’s overall impact, based on past experiences, the likelihood of it having a material impact on investment markets is small.

Is there opportunity in this risk?

This is why we think it’s appropriate to question whether there is opportunity in this risk. Markets tend to overreact to negative news, which may create buying opportunities. Investors with excess cash should consider deploying into markets during these periods of fear. While it is likely that volatility will remain elevated for some time, a disciplined approach and diversification can help mitigate risk and can be an effective tool when the timing of an event is uncertain.

We also think now is an opportune time to discuss investing a portion of your portfolio into solutions that address tomorrow’s crises. The World Economic Forum lists failure to regulate the causes of climate change, extreme weather, human-made environmental disasters, and access to potable water near the top of their list. For investors who seek to align their portfolios with these themes, there are options available and opportunities to capture. Please contact your wealth advisor to discuss these in more detail. 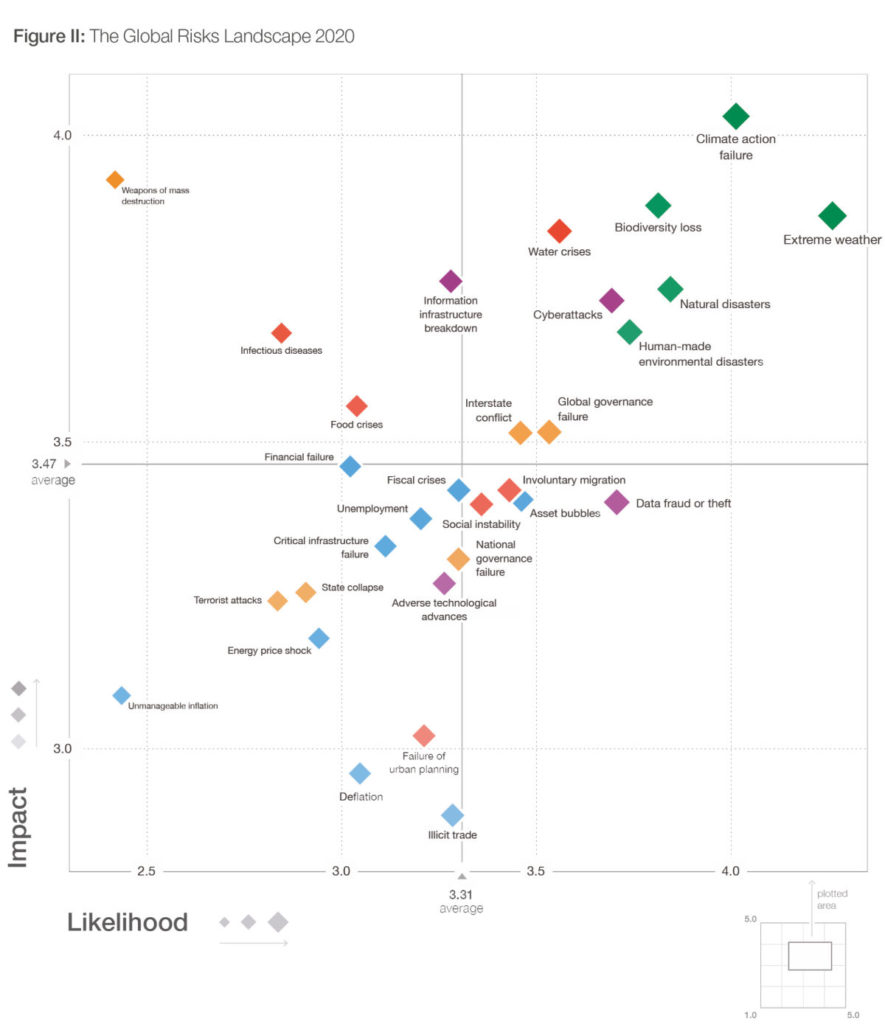