We Believe This Time is Different

Investors have expressed their concerns that global financial markets are on the verge of another crisis by driving down prices in select asset classes.  Overinvestment in the cycle following the great recession focused primarily in two areas: commodities and emerging markets.  As a result, these two sectors have experienced extreme selling pressure over the past couple of years.  Indeed, the Bloomberg Commodities Index and the MSCI Emerging Markets Index are down 47% and 27%, respectively, from their highs to their lows during the past two years.  More concerning, there have been signs that this may be spilling over into other related investments.  For example, high-yield bond spreads, the difference between yields on high-yield bonds and comparable U.S. Treasury bonds, have widened significantly.  In addition, the dollar has strengthened largely at the expense of emerging markets’ currencies.  Investors are left asking the question – could we experience a contagion effect that is widespread enough to start another global financial crisis?

What this means to us – We do not believe that expected defaults from commodity producers and emerging market countries and companies will lead to a new crisis.  In 2007, sub-prime mortgage bank loans amounted to approximately 17% of GDP, according to data collected by Empirical Research Partners.  Fast forward to today, debt outstanding from the emerging markets and commodity producers amounts to less than 4% of GDP.  This debt is primarily held by hedge funds and mutual funds and is considered to be a risky investment.  This is in contrast to the mortgage crisis, which saw mortgages held by a range of both risk taking and risk averse investors (e.g., banks’ balance sheets, money market funds, etc.).  It was investments made by banks and money market funds, among others, in these toxic assets that threatened to bring down the financial system.  We do not see the same level of widespread imprudent behavior today. 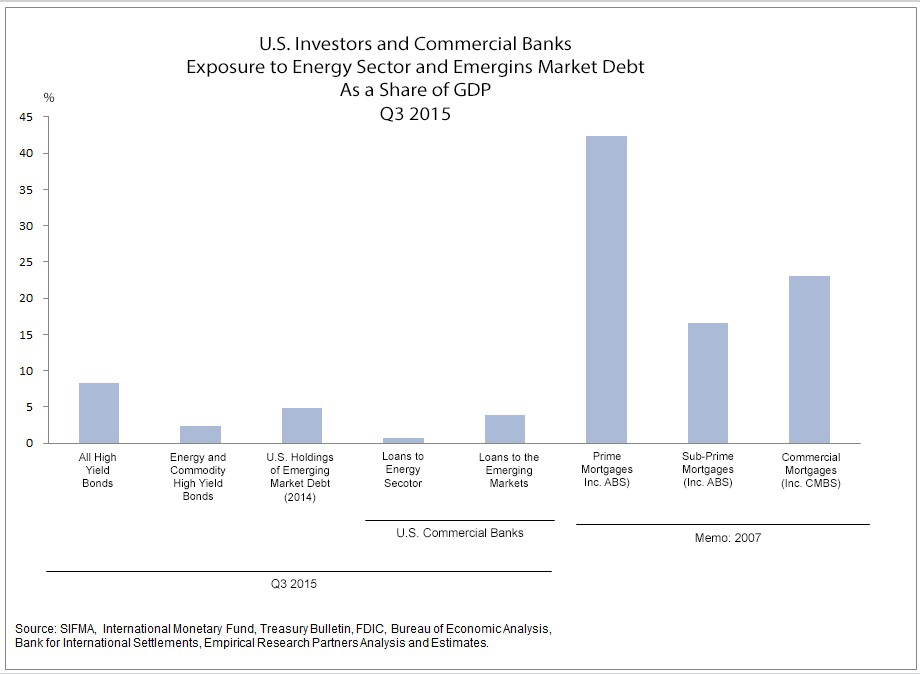