Volatility, A Recession, and A Second Wave – What’s Next for Investors?

Despite a wild ride thus far in June, the S&P 500 Index is effectively flat for the month. After rising 6.2% through Monday (June 8th), which took the index into positive territory for the year, stocks sold off sharply over the next four days. It is tempting to blame the sell-off on the National Bureau of Economic Research’s (NBER) announcement that the US is officially in a recession, the grim outlook from the Fed, or rising COVID-19 case counts in recently re-opened economies. Instead, we believe that investors were merely taking profits after a 45% rally from the March lows.

We are (officially) in a recession – now what?

On Monday, June 8th, the NBER officially announced that the US economy is in a recession. It surprised almost nobody. The NBER’s Business Cycle Dating Committee determined that the economy peaked in February 2020. While the classification of a recession is subjective, the NBER defines it as “a significant decline in economic activity spread across the economy, lasting more than a few months.” In this case, the committee decided that “the unprecedented magnitude of the decline in employment and production… warrants the designation… even if it turns out to be briefer than earlier contractions.”

Recessions may reflect poorly on the current level of economic activity; however, their declaration is less dire for the future performance of stocks than one might expect. That is because the NBER is typically slow in calling the recession. Only once was a recession declared by the NBER that wasn’t at least two-thirds complete, occurring during the second leg of the double-dip recession in the early 1980s. As the table below shows, while short-term performance is mixed, one-year returns (with one notable exception) are generally pretty good.

Federal Reserve Chairman Jay Powell played down recent evidence that unemployment may be recovering at a press conference last Wednesday, saying, “We have to be honest that it’s a long road… depending on how you count it – well more than 20 million people displaced in the labor market.” That led the FOMC to announce that they are not even thinking about raising rates (nor are they “thinking about thinking about raising rates”), and that they expect to keep rates near zero through 2022. Low rates fueled equity markets higher throughout the 2010s despite tepid economic growth -reminding investors of an important lesson: “Do not fight the Fed.”

The number of COVID-19 cases continues to climb, with daily new case counts accelerating back above 25,000 in recent days. The rise has sparked concerns over the economic re-opening in several states. We think it is important to consider these numbers in the context of the higher number of tests that are being conducted. Indeed, the percentage of positive test results actually has declined from 22% in early April to 4.5%, and the number of COVID-19 related daily deaths also is declining. It was expected that, with the easing of quarantines and lockdowns, the number of new cases would move higher. The optimists among us, however, argue that steady case counts and declining mortality, despite rising social and economic activity, is evidence that we have successfully flattened the curve and that future containment measures can be more precise. 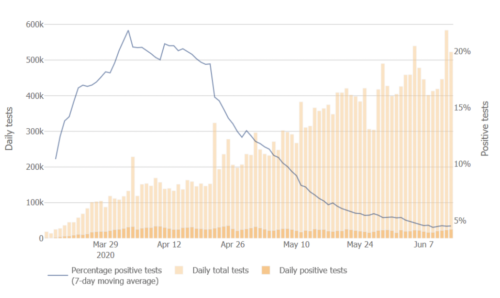 As we have suggested over the last few months, markets tend to overshoot current economic conditions. We expect more volatility over the coming months as new data presents itself. While there has been much debate over the shape of recovery (the current thinking being V, W, or square root), they each start with strong bounces off the lows. The Fed is determined to support that bounce for as long as possible. Nevertheless, we will invariably see data that suggests the recovery is doing better or worse than expected. For that reason, we believe staying close to strategic targets is the best course of action for now.