While Main Street may soon experience an economic slowdown, Wall Street has been wrestling with the prospect of slowing growth for the last ten months. Throughout the Fed’s record-setting rate-hike campaign, economists and policymakers have consistently underestimated the resiliency of the consumer. In some respects, a continued deceleration in economic growth may be well received by investors.

It is helpful to bifurcate the economy into two parts: “financial” and “real.” The financial economy represents the borrowing and funding markets: interest rates paid on savings or charged on loans and the premium paid for the future earnings of companies. On the other hand, the real economy references everyday transactions that move goods and services between households and businesses1.

The financial economy has corrected. Indeed, since the summer of 2020, yields on 10-year Treasury bonds have soared from below 1% to over 4%i.  30-year mortgage rates have risen from an all-time low of 2.7% to a multi-decade high of 7.1%ii. Finally, equity prices have declined sharply.

The real economy, however, has remained resilient. Consumer spending continues to grow, home prices are near record highs, and unemployment is historically low. For consumers and businesses not in need of capital (and who could ignore their investment statements), the economic picture has been fantastic.

Unfortunately, with time, the real economy tends to follow the financial economy.

One of the more frequently cited expressions in the financial press lately is that Fed policy operates with “long and variable lags.” This means that changes to policy can have a significant impact that is often only noticeable over more extended periods. Like a ship traveling from New York to London, a one-degree shift in direction is barely noticeable at first, but over time it causes the vessel to be several miles off the original course.

This phenomenon can be seen in the real economy. For example, consider the lag between moves in the Fed Funds rate and the unemployment rate. Rarely do they move in tandem. Indeed, throughout the 1960s, the unemployment rate fell despite rising interest rates. Even when rates increased to 10%, unemployment remained persistently low.

Similarly, the resulting economic growth that comes with reducing rates is not immediate. The most striking example was during the global financial crisis when the Fed aggressively cut rates while the unemployment rate continued to soar. Eventually, the two series converge with one another. 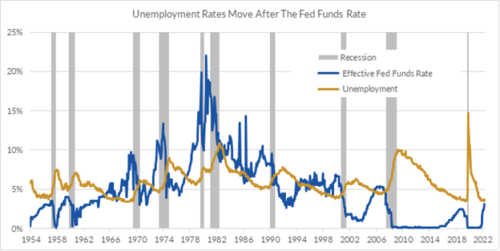 Another area that exhibits a similar lag is consumer spending, as measured by Personal Consumption Expenditures (PCE). Logically, spending should increase when rates decline as consumers have more incentive to borrow and get less of a benefit from saving. Instead, rates and spending initially move together as the more commonsensical outcome is delayed.

Why is there a lag between the Fed’s actions and the economic response? First and foremost, most businesses and consumers plan in advance, often well before changes to the Fed’s policies are implemented. Furthermore, they are usually hesitant to alter their plans.

The problem for policymakers lies in the variability of the lag. If the lag was predictable, the Fed could account for it. However, there has been little consistency in the delay between cause (Fed action) and effect (impact on the real economy). There have only been 12 recessions since 1948, and each had idiosyncrasies. Thus, it’s hard to take anything more than an educated guess on timing the response from policy actions. To return to our analogy, while the Fed knows that it needs to adjust the ship’s trajectory to stay on course, the captain does not know how far to turn the rudder or how long to keep it there. The Fed’s latest statements suggest they are more inclined to overtighten and risk needing to backtrack later.

If the real economic slowdown has yet to begin, what should investors expect in the financial markets? It is worth reminding our readers that the stock market is a forward-looking, discounting mechanism. Historically, financial markets have moved well in advance of the economic data. Take, for example, the 2008 financial crisis. The National Bureau of Economic Research (NBER,) the organization responsible for identifying the beginning and end of economic cycles, did not declare the recession start date of December 2007 until December 2008. The S&P 500 peaked two months before the recession began and fourteen months before the NBER called it. The index bottomed in March 2009, three months before the NBER declared that the recession ended in June 2009 (not announced until September 2010). Those investors who sold when the NBER declared the recession and waited to buy back when the NBER called its end missed a 40% return. 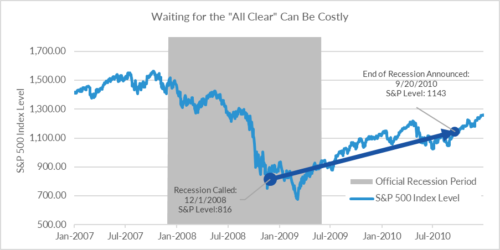 Analysts have been forecasting a Main Street slowdown for most of this year, so we suspect that the markets already reflect slowing growth. As such, markets may be unphased by a modest rise in unemployment or a decrease in consumer spending. Indeed, softening economic data would suggest that the Fed’s policy actions are working and could comfort investors concerned about inflation. The Fed, too, is likely to welcome indicators of a weakening economy, which would give them breathing room to slow the pace of rate hikes. While this may not result in loosening monetary conditions, a more relaxed Fed may significantly reduce the risk to investors and cause equity prices to rebound sharply.

Investing amid the threat of recession is difficult. As we move through the next several months, it may become increasingly difficult to look beyond headlines of rising unemployment, falling house prices, or consumer belt-tightening. The urge to react and adjust course may be strong. Like another great ship captain, Odysseus, it may be most appropriate to ignore the sirens, tie yourself to the mast, and just keep rowing through the storm.

1 In other contexts, “real” refers to inflation-adjusted. While we might prefer to use a different word, we believe it is important to align this particular language to the Federal Reserve chairman’s comments.