The Mathematical Secret of RIA Success

Why are some financial advisory firms more successful than others? Why do some become better over time while others stagnate, eventually fading into oblivion? Is there a single secret of success for these businesses?

The answers to these questions are usually complex, feature lists and go something like this: Successful advisory companies possess, employ and benefit from a favorable mix of vision, strategy, execution, skill, expertise, market conditions, leadership and management, capital, innovation, external relationships, timing and luck.

While answers like this can be helpful, at least as a starting point, they typically omit the most important of all prerequisites for success—a key commonality that links and empowers all successful advisory organizations: They are full of people who have placed their trust in one another and therefore can cooperate with maximum efficacy.

Sound a bit New Age to you? Like something you might hear at a wellness seminar over a quinoa and kale salad (with the dressing on the side)? Well, it’s actually an inarguable fact based on math and logic. Certainly, we financial advisors driving for success can respect math and logic, can’t we? 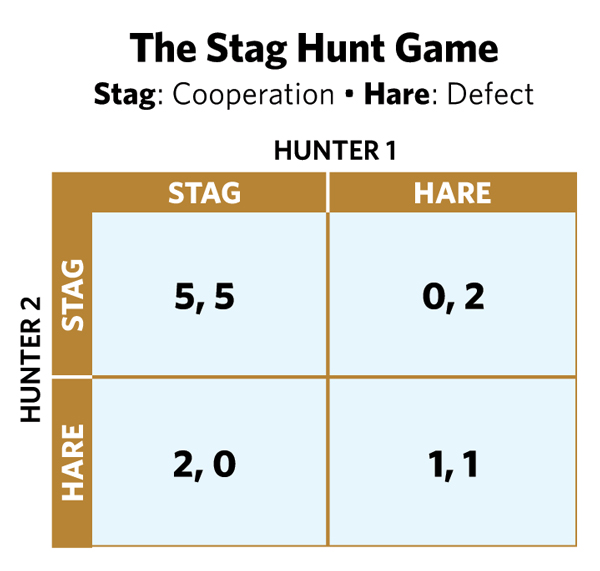 To grasp this concept, let’s travel back in time and visit 18th century philosopher Jean-Jacques Rousseau. Rousseau imagined a stag hunt. A group of hunters have tracked and cornered a large stag and, if we assume they are patient and cooperate, should be successful in their hunt, providing an ample food source for themselves and their families for several days. If, however, they do not cooperate or are noticed by the deer, they will lose it and go hungry.

They lie in wait for many hours when, suddenly, some hares wander right in front of them. If one of the hunters goes after a hare—an easier target that will feed that particular hunter and their family for a day—the stag will surely notice and flee, causing the hunters who did not go for a hare to go hungry.

Consider this dilemma. Each hunter must individually consider the risk that anyone of their companions might selfishly go for a hare, as any defectors know that at least they will eat even if the other stag hunters go hungry. What would you do if you were one of these hunters?

Enter John Forbes Nash Jr., the 20th century mathematician whose story is told in the book and movie A Beautiful Mind. Nash, who substantially advanced the field of game theory—the mathematical study of strategic interactions among rational decision-makers—discovered the concept of “Nash equilibria.” These occur when “players” (decision-makers) each make their best decision taking into account the decisions of the other players, which remain unchanged.

In this table, assuming there are only two hunters, both will have five days of meat if they cooperate in hunting the stag. If they both go for the hares, they will each have one day of meat. If, however, one goes for the stag while the other goes for the hares, then the latter will have two days of meat, and the former will have none. The 5,5 and 1,1 results are both Nash equilibria, though the 5,5 result is obviously better for both hunters.

Advisors play the stag hunt game just about every day, whether they realize it or not. Here’s an example. Two advisors are working at the same firm but have different ideas about modernizing, integrating or improving one of their firm’s key platforms, such as its investment or operations platform. (It really could be any strategic endeavor.) They could cooperate and arrive at a new approach that works best for both of them. Alternatively, they could both defect and continue to use the firm’s old platform without change. This solution is less ideal, but it would allow the firm to continue operating for some period of time. Finally, one of the advisors could decide to move forward with at least some changes while the other does nothing, resulting in great inefficiencies and possibly leading to the firm’s downfall or breakup. In this example, cooperative change is the stag, while no change is a hare for each. A split decision leaves one advisor with at least a hare while the other advisor may end up with nothing. If the advisors can simply learn to trust each other and cooperate, they will successfully hunt the stag—achieving the optimal result for both.

Another example might be two advisors within a firm who are considering a merger or another strategic transaction that would improve the firm and help it prepare for a more dynamic and secure future. If they cooperate in pursuing a transaction, they and their clients will be secure for many years to come. If they both defect, they will continue to operate for some time but will not address the issues that could have been solved through a transaction. If one wants to cooperate and the other does not, then the former might depart, leaving the latter to falter. Here, cooperation toward the transaction is optimal, while mutual defection is suboptimal but survivable. A split decision yields something less than optimal for the advisor pursuing change and possible disaster for the one remaining behind.

There are countless ways these dynamics can play out at advisory firms, and countless ways advisors fail to get the best results—mainly because they are pursuing their own self-interest, which hinders trust and cooperation among other team members. The firms that get the best results do so because their members have learned to work together. These people have learned that while they individually may be tempted to pursue a safe or selfish solution that makes the most sense to them at the time, they can achieve a better solution by working together and allowing for a solution that is best for the whole group.

Make sense to you? Well, if it does, then you are in good company. Rousseau, Pareto and Nash would likely agree. (Nash won the Nobel Memorial Prize in Economic Sciences in 1994.)

Let’s now look at larger firms, where there are more people involved in decision-making. What would happen at a bigger firm when most people are willing to cooperate for the greater good but a small minority are not? Time to introduce another theory—the “theory of constraints,” made famous by Eliyahu Goldratt. It effectively states that an organization’s potential is limited by the constraints within it. Some describe it by using the physics analogy that a chain is only as strong as its weakest link. Or, if there were a knot in a garden hose, the output of the hose would always be limited until the knot could be removed. So it is with organizations.

Even in a company of mainly collaborative members, a few defectors can hold back the organization’s potential. Thus, cooperation must be pervasive within the organization to achieve optimal results. In the parlance of the stag hunt game, all of the hunters must cooperate.

In fact, without trust and cooperation, that game becomes an altogether different one—the prisoner’s dilemma, devised by mathematicians Merrill Flood, Melvin Dresher and Albert Tucker. This is a single game in which two prisoners in solitary confinement face interrogation by the authorities, and each must decide whether they should trust the other by remaining silent or defect and betray the other to the authorities. If both stay silent, they will get a light sentence. If both defect, the sentence will be harsher but still not as severe. If one stays silent but the other defects, the defector will be set free while the other receives a heavy sentence. Unlike the stag hunt game, the prisoner’s dilemma has only one Nash equilibrium—both prisoners must defect and betray each other. This is not a recommended formula for success at an advisory firm!

So, getting back to the questions posed at the beginning of this article, why are some advisory companies more successful than others? Is there a single secret of success? I believe the answer is this: While successful companies may possess all or many of the traditional elements of success, they are all made up of people who consistently trust each other and are willing to compromise their own self-interest and pursuits to cooperate for the benefit of the greater good, thereby—ironically—optimizing their self-interest. They are successful stag hunters. And those who act selfishly or without regard to their colleagues? They’re prisoners of their own making, waiting to betray their peers. It’s all a matter of math and logic.

Michael Nathanson, Chair and Chief Executive Officer of The Colony Group, is a highly respected and experienced leader in the wealth management industry. He is relentlessly dedicated to bringing meaning and joy to the lives of Colony Group clients and team members by fostering a culture that values lifelong...