The Likely Reality of Lower Rates for Longer

The case for monetary policy normalization (i.e., raising interest rates) is not as clear as some initially believed, even though U.S. Treasury bond interest rates are currently low compared to historical levels.  The Federal Reserve (Fed) started tightening with a 25 basis point increase at their December 2015 meeting.  Weak economic data, low global sovereign bond yields, and Janet Yellen’s commentary following the April meeting all suggest the tightening cycle will be deliberate.

Since the December meeting, many key economic indicators have slowed.  In particular, expectations for gross domestic product (GDP) growth for the first quarter of 2016 have declined significantly.  The Atlanta Federal Reserve publishes a series called “GDP Now,” which attempts to forecast quarterly GDP using available economic data.  The series changes throughout the quarter as new inputs are released.  The following chart from the Atlanta Fed illustrates how soft the data has been. 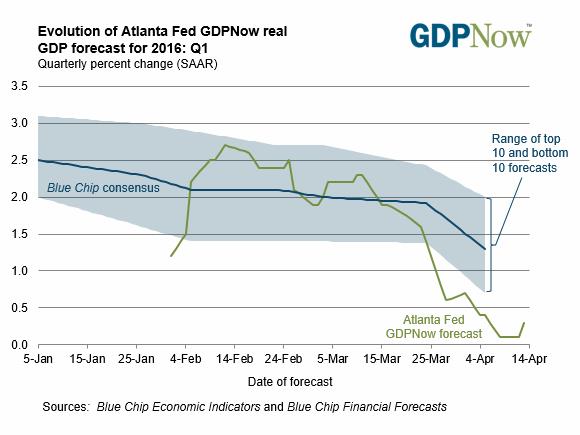 Interestingly, there is no one particular data series driving the declines, rather the data has broadly fallen short of estimates.  Currently, the consensus expectation is that economic reports will improve as the year progresses.  Nevertheless, the Fed seems likely to wait and see how the second quarter unfolds before raising interest rates again.

While US yields are quite low, they are hardly an outlier.  Global yields for most major industrial nations are at levels well below those of the U.S.  This reality has been driven by various central banks, including the Bank of Japan, European Central Bank, and Fed.  All have lowered interest rates in attempt to ratchet up growth for their respective economies.  The Fed is the only one of these currently attempting to normalize monetary policy.  The problem with normalization is that higher rates tend to slow growth, yet growth appears to be slowing already.  Furthermore, with interconnected global financial markets, interest rates of developed economies often influence one another.  In practice, this can prohibit wide differentials in interest rates between countries.  As Europe and Japan both have adopted negative interest rate policies and are actively engaged in quantitative easing (QE), the United States stands alone in its effort to raise rates.  As such, any attempt to increase US yields will likely lead to a stronger dollar, which effectively tightens U.S. financial conditions and reduces the need for the Fed to raise rates much further. 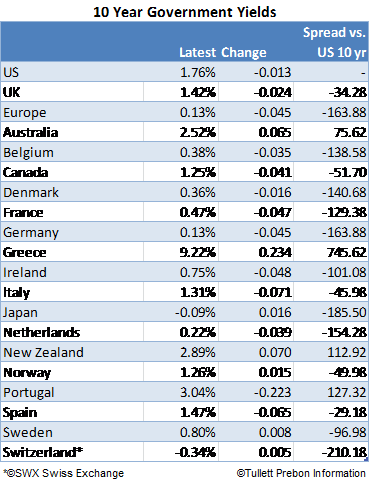 In our view, the Fed will continue on a path to normalize interest rates, although this process may be slower than many market pundits predict due to the less certain outlook for global growth.  In fact, Janet Yellen’s message was considerably more dovish following the April FOMC meeting as she walked back expectations for future rate increases calling for a “gradual” process.  US interest rates appear set to remain lower for longer than some believe.