2022 was a challenging year for investors, as both equities and bonds posted losses. Most stock markets across the world experienced a bear market during the year. Despite less exposure to the turmoil caused by Russia, U.S. stocks underperformed international stocks, with the S&P 500 Index and MSCI ACWI ex U.S. Index finishing with returns of -18.1% and -16.0% respectively. The Bloomberg U.S. Aggregate Bond Index suffered a loss of -13.0%, its worst performance of the past 50 years. Investors have become accustomed to bonds providing support for a portfolio when stocks are down; however, with losses from both stocks and bonds this year, a 60/40 mix of the S&P 500 and Bloomberg U.S. Aggregate Bond indices suffered its second-worst return on record. There were only a few assets that generated positive returns, including cash, energy stocks, and some commodities.

The fourth quarter, on the other hand, was a ray of sunshine in an otherwise dreary year. Indeed, the S&P 500 increased 7.6%, its only positive quarter of the year. International stocks shined even brighter, highlighted by a 14.3% return for the MSCI ACWI ex U.S. Index. Returns from fixed income were more subdued, with the Bloomberg U.S. Aggregate Bond Index returning 1.9%, also its only positive quarter of the year.

Investors have become accustomed to better results over the past few decades, as the period sometimes called the Great Moderation produced stronger returns across most risky asset classes. This period was bolstered by generally low inflation, easy monetary policy, and relative peace. Low inflation and declining interest rates pushed valuations higher, driving above-average returns. More recently, near-zero interest rate policies reduced the cost of capital for borrowers and compelled investors to take on more risk to generate suitable returns. Earnings and cash flow took a back seat to revenue growth as lenders and venture-capital investors were eager to provide capital to high-growth companies. This allowed some companies to endure for longer than they otherwise might have, but the rapid rise in interest rates is beginning to pressure weaker firms. As Warren Buffet once said, “you don’t find out who’s been swimming naked until the tide goes out.” In the remainder of this letter, we look at whether we may be entering a new era and, if so, what investment opportunities may arise.

MSCI ALL COUNTRY WORLD INDEX WITH SELECTED HEADLINES FROM Q4 2022 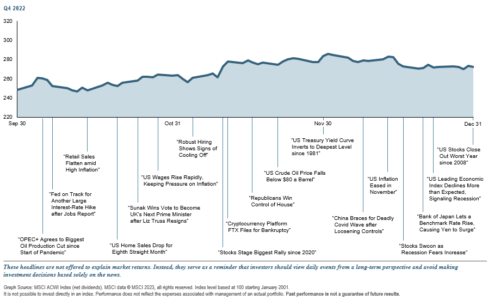 It is common for pundits to forecast regime change in the aftermath of significant economic or investment dislocations. The upheaval around the pandemic has investors wondering if we have reached such an inflection point and whether markets are poised to enter a new era. Many feel that the extended period of disinflation, accommodative policy, and declining geopolitical risk is over. There was a similar sentiment following the Great Financial Crisis (GFC), which never came to fruition.

There are several reasons to believe that we may be at the dawn of a new investment era. First, the magnitude of the combined monetary and fiscal stimulus put in place by policymakers during the pandemic was among the largest in history. Next, the pandemic has caused millions of workers to retire earlier than they might have otherwise, aggravating the impact of an aging population across developed countries. This is causing structural imbalances in the labor force, corroborated by the extraordinarily elevated level of job openings. Finally, the pandemic, along with rising geopolitical tensions, is causing companies to rethink their supply chains, with a shift towards emphasizing resiliency and security over efficiency. Indeed, Russia’s invasion of Ukraine, the rise of China and President Xi Jinping, and the election of populist politicians around the world are causing uncertainty and distrust across the geopolitical landscape.

As a result of these factors, some investors are bracing for a sustained period of higher inflation and interest rates. Stimulus measures pulled forward demand for many goods, pushing up their prices. A diminished labor force is pressuring companies to pay higher wages to retain and attract employees. Finally, restructuring supply chains after years of outsourcing to regions with lower labor costs is likely to prop up prices. One needs to look back to the late 1970s and 1980s to find a similar environment. Most of today’s market participants were not investing back then.

While a higher-inflation, higher-rate environment may be unfamiliar to most investors, they need not fear it. They just need to be prepared. If inflation runs modestly above the Federal Reserve’s target of 2%, and interest rates are resultantly higher, there are still segments of the investment markets that should prosper. Investors may simply need to expand their horizon to find them.

One potential beneficiary could be bonds. Real yields, which net out inflation, are at levels not seen since before the GFC. Once again, investors can earn a reasonable return from bonds, which is especially helpful to retirees, who are more dependent on their fixed-income investments and savings accounts to generate income.

Beleaguered segments of the equity markets may also gain from regime change. Growth equities have outperformed value, while U.S. equities have bested international equities for an unusually prolonged period, which we partially attribute to an extended stretch of easy financial conditions. Historically, value and international have performed better in higher-inflation, higher-interest-rate environments.
Active managers may also be indirect winners from a new regime. Investors have piled into index funds over the last several years. The chart below illustrates the difficulty some active managers have had trying to outperform their benchmarks (a rising blue line means active managers outperform); however, it also shows that when inflation is rising, active managers’ relative performance improved. Hedge funds that seek to exploit the value proposition of active management through leverage and shorting may be particularly well positioned if higher inflation persists.

Recognizing that a change is coming before other market participants generally leads to stronger returns. While we are not yet certain that the budding signs of regime change will stick, we are preparing for this scenario as well as other potential outcomes.

Or More of the Same?

Questions remain as to whether we are truly entering a new economic regime or merely continuing to experience the economic effects of the pandemic. Certainly, the developments mentioned above will influence markets. Most of them have numerous, sometimes conflicting impacts on the global financial system, however.

For example, slowing population growth and the early retirement of workers have reduced the supply of labor and have forced wage inflation higher. However, slower growth in the workforce generally leads to slower GDP growth, all else being equal, which is typically disinflationary. The offsetting forces of wage inflation and slow GDP growth are making it difficult to predict how sustainable higher inflation may be.

As a result of rising geopolitical tensions and the supply chain issues that arose from the pandemic, companies and politicians are considering bringing manufacturing back home, a phenomenon known as onshoring. Nevertheless, it remains to be seen how far companies are willing to go on this front. Are corporate executives willing to sacrifice near-term profits, which typically determine a significant portion of their compensation, for a more resilient supply chain, which may not prove useful until sometime in the distant future? This consideration has us questioning if the restructuring of supply chains will be as inflationary as some are projecting.

Deficit spending and easy monetary policies have been a constant source of debate amongst economists. Many of them were predicting runaway inflation following the GFC because of these policies, which did not materialize. Other economists have argued that fiscal stimulus or deficit spending has more room to expand, using Modern Monetary Theory (MMT) to support this outlook (Q2 2019 Colony Market Perspectives). Notably, the MMT camp has been particularly quiet over the last year as the combination of pandemic-related fiscal and monetary stimuli may have reached a tipping point. That being said, it remains unclear how much each of the inflation tailwinds outlined in this letter contributed to inflation. Indeed, Japan has engaged in quantitative easing off and on since 2001 and generally maintained a zero-interest rate policy since 1999 but has faced deflation rather than inflation over that time.

These contradictory influences on the global economy and policymakers’ response to them should continue to evolve over the next several years. Famed investor Sir John Marks Templeton once said, “the four most expensive words in the English language are, ‘This time it’s different.’” We must remember this warning as we contemplate the path forward.

If the next cycle resembles the last, the investment playbook should be familiar to most investors. Lower inflation and interest rates may allow equity valuations to readjust to their prior levels. This would favor U.S. equities, specifically growth-oriented technology firms at the expense of slower-growth businesses such as financials and industrials. It likely also means that fixed-income yields would decline again, perhaps compelling investors to take on greater risk to generate higher income.

2022 was a tumultuous year from multiple perspectives. The world experienced war, disease, and geopolitical discord, the combination of which investors have not had to grapple with for decades. Therefore, it is not surprising that the investment markets were on edge for most of the year.

As we (hopefully) move past the pandemic and unwind policies put in place to support the economy during that period, the markets are struggling with what may come next. There seem to be an equal number of pundits forecasting the start of a new era as there are expecting the status quo ante. This argues for not positioning portfolios too close to either of the two potential outcomes. We counsel a deliberate approach that adds to risk opportunistically as incoming data begins to establish certainty on the future direction of the economy.

Richard Steinberg is the Chief Market Strategist, Co-Chair of the Investment Division and a Principal of The Colony Group. He brings over 25 years of experience leading seasoned investment teams and developing customized investment strategies for private clients, corporations, foundations, retirement accounts, profit-sharing plans and pension accounts. He also...