In the days following the election, risk assets rallied despite near unanimous calls for widespread declines in the wake of a Trump victory.  Indeed, the S&P 500 had its strongest week (+3.8%) since October 2014 and the Dow Jones Industrial Average (+5.4%) its best since December 2011.

Trading in the futures market did not immediately get off to a strong start once the polls closed and the media started reporting results on Election Day.  A little after midnight, S&P futures declined by more than 5%, triggering curbs on trading in the futures markets.  By the time trading opened in the United States on Wednesday morning, however, the S&P had recovered most of the previous night’s losses. 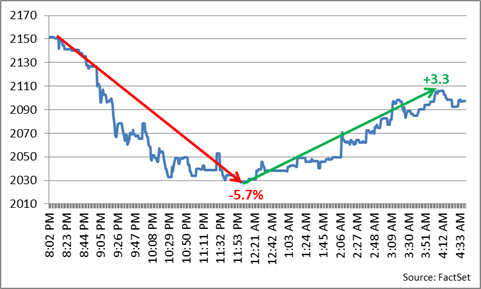 BCA Research gives three reasons for the unexpected trading seen in the equity markets last week.  First, investors who bought “insurance” in case of a Trump victory were busy covering their shorts (buying back the stock they had borrowed and sold previously), pushing the market higher in the morning.  Second, investors were quick to draw parallels to the aftermath of the Brexit vote, where a few days of selling was followed by a market rally that saw the UK stock market reach new highs.  Finally, as we have explained in previous communications, many of Trump’s policies could be positive for stocks over the near-term.

We, like many of our peers, were surprised by the markets’ response to Mr. Trump’s victory in the days following the election.  Nevertheless, we have previously argued that fears over a Trump victory were overly pessimistic when looking at the long term.  Mr. Trump has maintained a conciliatory tone since winning the election, and it is important to the markets that he maintains a less antagonistic temperament now that he is Commander in Chief.

Stock traders were quick to sort out the winners and losers from Mr. Trump’s (presumed) policy initiatives.  Financials, health care, and industrials dominated the winners list.  The first two sectors are likely beneficiaries of Mr. Trump’s promise to reduce regulations, while the last might get a boost from his infrastructure spending proposal.  Consumer staples, technology, and utilities exhibited weakness as investors rotated out of both more defensive sectors and those equity investments that had been seen as higher yielding  alternatives to fixed income.

While most investors were focused on trading in the stock markets last week, bonds exhibited volatility rarely seen in the asset class.  The 10-year Treasury yield climbed above 2% for the first time since January as fears over fiscal stimulus stoking inflation caused investors to sell bonds.  Bloomberg estimates that bonds lost a combined $1 trillion in value last week alone.

We have been positioning client portfolios for a gradual rise in interest rates over the next several years.  We are aggressively seeking new investment opportunities that can navigate this environment.

Nevertheless, last week’s significant move in rates may be overdone.  First, some investors expected that post-election volatility could cause the Fed to defer a hike in December.  With risk assets giving an “all-clear” sign by trading significantly higher initially, the Fed seems more likely to stick to their pre-election timeline.  In addition, at some point, we expect the Trump honeymoon to end.  His carefully crafted message thus far has been just what the country needed.  It is possible, however, that we see some examples of his polarizing rhetoric in the future.

We are working diligently to reposition client portfolios where appropriate based on our evolving outlook.  As has been our way in the past, we will be deliberate with any changes we make as we carefully consider both the upside and downside risks.