Jim Fitts, CFP® works as a Senior Family Wealth Advisor and Managing Director, Business Owner Services, from our Concord office. In this role, he helps business owners and their families develop philanthropic programs and multi-generational wealth plans. Outside of Colony, he lends his skills to several local charitable organizations, and in addition, he serves as a conservation photographer and field researcher on private conservancies in Kenya.  Around his home community of Newfound Lake and more broadly across NH’s Lakes Region, Jim currently contributes his financial acumen as a trustee, officer, or committee member to four organizations, serving on their executive, finance, investment, strategic planning, governance, and audit committees.

The Mayhew Program in Bristol, NH, supports and challenges at-risk boys to develop their potential and build a positive future for themselves. The program began in 1893 when the Groton School (MA) established a summer camp at Squam Lake for underprivileged boys from urban areas throughout New England. Jim recounts that Mayhew is the boy’s first opportunity to find out who they can be and how they can realize that vision of themselves in a setting away from outside influences. The focus is on helping the boys apply the program ideals of respect, responsibility, community, and challenge to their lives at home, school, and beyond.

Jim Fitts, CFP with a collection of his photographs from Africa displayed in his Concord, NH office.

Jim also serves at the Lakes Region Conservation Trust and the Newfound Lake Region Association. He was born near Newfound Lake and spent many summers at his parents’ camp. He now lives on that site in Bridgewater, NH. Jim recalls a time when he could see the bottom of the lake in thirty feet of water. As a conservationist, he has grown concerned about degradation around the lake over the past fifty years. Now, he puts his financial skills to their best-and-highest use helping to guide these organizations into the future.

About ten years ago, Jim’s imagination was captured by Africa when he participated in a walking safari in Kenya. Seeking a way to deepen his relationship with the country, Jim became a volunteer with the EarthWatch Institute. This led to a decade-long association with both the Ol Pejeta Conservancy and the Lewa Conservancy.

Jim has contributed his efforts to a wide variety of conservation projects in Kenya. He generally spends 2-4 weeks in the country each year. He has studied carnivores and disease transition in ungulates (i.e., hoofed mammals), working alongside members of the Smithsonian Institution and the Max Planck Institute. However, the work closest to his heart is black rhino conservation. Rhinos suffer from a variety of threats ranging from food scarcity due to competition with elephants and giraffes for the same browse, loss of habitat from human expansion, predation, and poaching. Rhino horn is sought in parts of Vietnam for its perceived medicinal qualities and in Yemen for use on decorative dagger handles. Given the potential for peril, Jim is accompanied by armed rangers when working in the field. However, through active management, reproductive rates are now outpacing mortality rates. It is a challenge to maintain diversity in the gene pool which adds difficulty to conservation efforts. According to the Conservancy, Lewa’s rhino population has grown from the initial 15 specimens to 169 rhinos today. 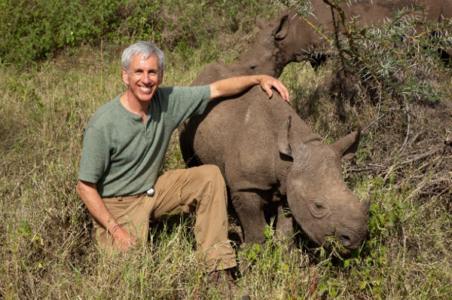 Jim spent many years taking photographs of the rhinos to create a catalog so that rangers can identify individual animals by their features and scars. His travels in Africa have placed him near many wild animals including hyenas, lions, elephants, cape buffalo, rhinos, giraffes and Grevy zebras, another endangered species. Despite the long-distance travel and many hardships encountered during his trips, Jim feels uplifted by his connection with the land and the animals of Kenya. Rather than seeing it as a sacrifice, his experiences have given him a chance to go beyond his usual purview and make a positive impact on the conservancies. His work in Kenya also extends to chairing the advisory board of Education for All Children, a bi-national organization providing scholarships to exceptional Kenyan youth from high school through college. Jim also individually sponsors the college education of EFAC scholars.

Jim’s charitable work in the NH Lakes Region and in Kenya, Africa, contribute to a more vibrant community and form part of his legacy.