The last year has been challenging for investors in Chinese equities. The country’s zero-tolerance COVID policy has led to frequent lockdowns of major cities, which have taken a toll on the economy. Moreover, leadership unnerved investors by putting the regulatory clamp on for-profit tutoring companies and launching seemingly abrupt investigations into foreign-listed Chinese companies. Lastly its relationship with Russia is complicated in a world where Russia currently has few friends left. As a result of all this, the MSCI China index fell more than 50% since the beginning of 2021. Many investors have deemed the country “uninvestable.”

While we appreciate the power of sentiment in the market and the potential wisdom of the crowd, we sometimes find that the proverbial baby is being thrown out with the bathwater. We believe this may apply here, as others may have been too rash in their assessments. In our opinion, China is investable for those willing to do their homework.

Too Big to Ignore

China’s economy and market are simply too large to ignore. At nearly 1.5 billion people, China represents almost 20% of the world’s population. As the second-largest economy globally, its economic output is massive. When adjusting the size of the economy for purchasing power, China has the largest economy in the world. MSCI currently caps China’s weight within its emerging market index at 30 percent; it would be more than 42 percent of the index without the cap. 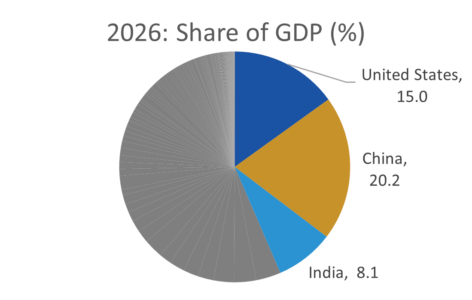 Rapid Transformation and Modernization Is Attractive for Capital

The country is also rapidly modernizing. The middle class has grown exponentially from less than 1% of the population in 2002 to more than 25% in 2018. China’s e-commerce transactions represent 52% of global e-commerce, and more than 90% of urban denizens use digital payment systems. Having long been considered an agricultural and manufacturing economy, the services sector now represents more than half of China’s GDP.

As China’s economy has matured, its growth rate has slowed. However, its growth remains well above that of the U.S. and other developed market countries. Its zero-tolerance COVID policy is taking a more significant, albeit temporary, toll. China’s regulatory stance is well known and the focus of its government on specific industries has been well communicated. China’s real estate bubble has already been exposed. We believe that the price declines in Chinese markets have mostly accounted for these potential downside risks. Thus, Chinese equities are potentially more susceptible to upside surprises, such as the relaxation of China’s draconian COVID restrictions, additional signs of policy support to businesses, and more economic stimulus while the rest of the world is tightening its belts. As its leaders prepare for its 20th National Congress later this year, they will be seeking to energize the population and the economy.

At the outset of the crisis in Ukraine, many geopolitical watchers wondered how China might support its ally, Russia. In our view, China’s lack of tangible response provides a clue to its intent. Whereas Russia seeks power through expanding its territory, China desires to grow its economic power. That requires that it maintain strong economic relationships with the rest of the world.

China’s domestic stock market is dominated by retail investors. Whereas, in the U.S., 80-90% of trading is done by institutions, they are a relatively minor part of the Chinese market. Many investors have described China’s equity markets as akin to gambling While more institutional capital has flowed into the country since China began allowing foreign investors to access domestic bourses in 2014, most experts agree that plenty of inefficiency remains. We believe that insightful analysis of available information can provide active managers an edge in investing against less informed retail investors.

We believe that investors should focus on the Chinese A-Share market. Whereas much of the consternation of investors centers around the lack of transparency in cross-border listed companies, the A-Share market provides direct access to companies operating within China who are primarily raising capital from Chinese locals rather than foreigners. We believe that this provides a more direct link to Chinese economic growth and potentially further aligns incentives.

We also suggest you invest alongside a specialist. A team with boots on the ground In China should know the market very well. This can potentially provide a significant leg-up on new investors entering the space. We believe a dedicated allocation to the country, in addition to the more opportunistic allocations in more broadly diversified international funds, should enhance a portfolio’s risk-adjusted returns.

Finally, we recommend investing with patience. Stocks are volatile and thus require long time horizons. This is especially true of washed out, out-of-favor sectors and countries. By sizing your position appropriately it should both add to portfolio performance with limited downside impact.

As with anything, investors should always review developments relating to their long-term thesis and act accordingly.