As Appeared in Chief Executive Magazine

As the CEO of a national company that strives to deliver value, I’ve been intrigued by a Harvard Business Review article, “The Elements of Value,” written by Eric Almquist, John Senior, and Nicolas Bloch. In this article, the authors imagine a value pyramid for products and services, in which customer satisfaction and loyalty increased by moving up the pyramid: 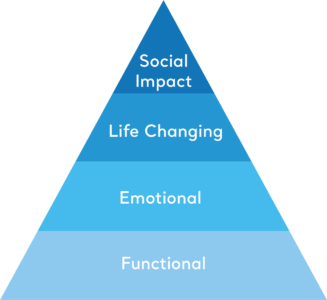 Expanding on Abraham Maslow’s 1940s “hierarchy of needs,” the authors argue that products and services must offer base functionality to be of value but that they become more valuable when they offer emotional value by, for example, reducing anxiety. They offer even greater value when they are life-changing by, for example, providing hope or motivation. And, the authors write, the greatest level of value comes from products or services that offer social impact, such as helping those in need, thereby transcending the needs of the self.

I’m not talking about traditional assessments of value, which might be more appropriate for a compensation exercise.  We’ve long been able to understand what someone’s skills, education and experience are worth in the marketplace.

I’m talking about relative value among people who otherwise perform comparable functions. Is there a broadly applicable value pyramid for employees that suggests how individual team members can move beyond conventional investments in skill, education and experience to offer increased and more differentiated value to the organizations for which they work?

I think so, and I think it looks like this:

Base: Play an Individual Role

The base level for adding value as an employee seems somewhat intuitive. It starts with performing the role for which the employee was hired or promoted. Yet, real value—even at the base level—doesn’t mean just executing on a series of job responsibilities. It means performing an assigned role holistically, proficiently, efficiently and proactively. In most cases, optimal base value can only be achieved over time, requiring organizational training, acculturation and guidance, in addition to “on-the-job” experiential learning by the employee.

An example of an employee playing their individual role at a financial services company might be an advisor who is focused on exactly that: providing advice to the clients they serve. Such an advisor can offer great value, especially as they become more experienced, skilled, efficient and effective at their job. But even when they are working with others to perform their job functions, they are not necessarily doing anything other than playing their individual role.

An employee can become even more valuable if they are able to transcend their individual role and also play a broader team-based role, causing the entire organization or a segment of the organization to function at higher levels. To achieve this level of value requires helping, inspiring, improving and even becoming critical to others through cultural, service, leadership, and innovative contributions. This is not to say that such an employee must be in a managerial role. To play a constructive team role requires an employee to rise above their individual role and, through acts and example, enable others to perform at higher levels. These employees, by the way, are the ones who never say, or feel, “that’s not my job” or “that’s not my problem.”

Let’s go back to our notional advisor. Suppose that, while focusing on serving their clients, they also are engaged in other behaviors that are highly supportive of others. Suppose that the advisor regularly offers help to others as a resource or they indirectly help others by being a positive example from a cultural, service or other perspective. In either case, they are focused not only on their own responsibilities but also on elevating others. In fact, these highly valuable team-based employees likely don’t even think in constrained, individualized terms. They seek to serve as many people—externally and internally—as possible and likely find great meaning in making a difference to a broader team.

Employees who perform both individual and team roles are highly valuable, as so many of their peers will remain stuck in their individual roles, probably without even realizing their fate. Yet, an even higher level of value and differentiation is reserved for employees who, in addition to performing individual and team roles, find meaning and motivation in their organization’s mission and constantly work to further it. These employees make contributions not only to their teams but also to achieving the organization’s mission.

An organization’s mission guides its daily functions, but its vision speaks to the way the organization will transform itself or others over time so that it can carry out its mission in the broadest and most impactful manner. Employees who, in addition to achieving the above distinctions, are able to make meaningful contributions—either individually or by influencing others—toward an organization achieving its vision are the most valuable and differentiated employees. They are the guide-stars, the forces of progress and the sources of long-term confidence and optimism on which others rely.

Like many CEOs, I have derived energy by working with some of these people firsthand.  They achieve the highest level of value by believing in, working toward and finding meaning in our organization’s vision. They want to work not just to earn a living and do rewarding work, but to derive personal meaning from pursuing our mission and being part of the team that actualizes a transformative vision—and everyone else knows it.

It’s a pretty simple paradigm, right? Of course not. The reality is that value and differentiation will vary in terms of magnitude and consistency within each level of the value pyramid. It’s also not always clear when someone moves up the pyramid—and there is always the possibility that someone will move down it.

The point of this exercise is not to categorize people across an organization in some sort of falsely precise manner. Rather, the idea is to offer a broad framework for what organizations really value among employees performing similar core functions and, conversely, how employees therefore might seek to enhance their value to those organizations.

Note, by the way, that I have not yet used the term “talent” anywhere in this article. That omission is intentional. Talent is, of course, important—at the base level—but it’s not talent that elevates an employee beyond that first level. Talent differentiates employees in how they perform their individual roles, but talent alone can only go so far in an organization that is larger than one person.

Leadership and the Employee Value Pyramid

So how does the employee value stack apply to the leaders of any organization? Well, that question presupposes that we already know who the “leaders” are. Whether the person is an advisor (to continue our chain of examples) or, say, a manager within a company, their job function is merely their individual role to play. They move from being an advisor or manager to something more valuable than that—a leader in this case—only as they move up the value stack and strengthen the broader team, lead it in pursuing the organization’s mission and make a meaningful difference in effecting a shared vision that transcends themselves and their organization.

And that brings us back to the first sentence of this article. How does this paradigm apply to the chief executive role? A CEO has many responsibilities, but merely having the title of CEO does not make that person invaluable. Just like everyone else, a CEO must establish value by helping everyone around them, living the organization’s mission and ensuring the pursuit of the organization’s vision. A CEO who does not aspire to climb the employee value pyramid has no right to expect others to do so and, at the risk of being blunt, is probably in the wrong role.

Michael Nathanson, Chair and Chief Executive Officer of The Colony Group, is a highly respected and experienced leader in the wealth management industry. He is relentlessly dedicated to bringing meaning and joy to the lives of Colony Group clients and team members by fostering a culture that values lifelong...