Everything Old Is New Again

In considering a recovery from the current crisis, our focus has been on relaxing (but not eliminating) social distancing measures, the impact of fiscal and monetary responses, and the likelihood that equity markets would move before the economy. This month we turn our attention to the longer-term implications.

While the cause of this crisis is quite different than its predecessor, policymakers’ response and our outlook on the future feel eerily similar to the recovery from the Great Financial Crisis. Both this time and last, we enter the recovery phase with record amounts of fiscal and monetary stimulus. Indeed, many of the programs that the Federal Reserve used during the financial crisis have been dusted off and updated to include a “2.0” in its name – from Quantitative Easing (in its fourth round) to the Term Asset Backed Securities Loan Facility (TALF). In addition, fiscal programs to support the unemployed and businesses (with a focus on small businesses rather than financial institutions this time around). We are using the same toolkit only this time it is supercharged!

We cannot discuss the 2010s without considering the impact of low interest rates. In theory, near zero rates may cause economic imbalances:

For much of the 2010s, investors positioned portfolios expecting higher interest rates. However, the Fed only began lifting rates at the tail end of the decade, never able to “normalize” interest rate policy. Despite all of the previously mentioned concerns, equity investors enjoyed the longest bull market in history, savings grew, and few bubbles grew large enough to pop. Investors learned two powerful lessons: low interest rates can persist and “don’t fight the Fed.” 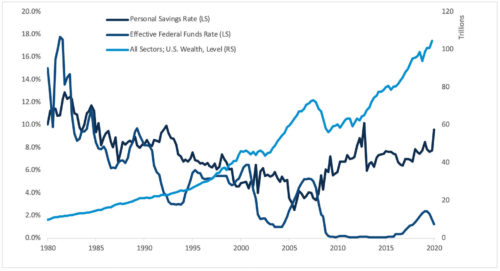 Sources: BEA, Board of Governors, FRED

Inflation remained stubbornly low throughout the last decade. Despite increasing national debt, Fed officials could not push inflation to its long-term target of 2%. Unemployment continued to move lower, past where most economists imagined the “natural level” of unemployment would settle, but wage growth remained modest. Even with the massive increase in government spending today, inflation expectations remain tame.

Overseas, it is difficult to envision how COVID-19 may catalyze change from the past 10 years. Equity valuations outside the U.S. remain relatively cheap compared to domestic stocks, but equity investors seem willing to pay up for growth, which has been generally lacking from companies outside the U.S.

As the crisis abates, we expect the already established decline in globalization to pick up pace. We believe governments are likely to increase protectionist and nationalist policies that promote domestic companies. While most economists agree that would be negative for global economic growth, there will be winners among companies that are positioned to grow within their own borders rather than those relying on international trade. 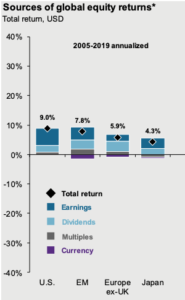 Positioning for a 2010s Redux

So how do we recommend positioning portfolios for this possibility of a 2010s redux?

All return values are MSCI Gross Index (official) data, except the U.S., which is the S&P 500. *Multiple expansion is based on the forward P/E ratio, and EPS growth outlook is based on NTMA earnings estimates. Chart is for illustrative purposes only. Past performance is not indicative of future results.