It may surprise you that the deepest recession in modern history has not hit Main Street, yet. While this data glosses over the pain being felt by some households, total personal income is up nearly 6% since the end of 2019. That rise is despite a 32.9% annualized decline in GDP for the second quarter and an unemployment rate of more than 11%. Just as public health officials have worked to flatten the curve of the virus’ impact on health systems, fiscal policymakers have, thus far, muted its impact on household finances. Increased government transfer payments have more than made up for the loss in wages and salary, in the aggregate. Indeed, for the first time since at least World War II, household income is above GDP. The situation is both currently necessary and unsustainable. 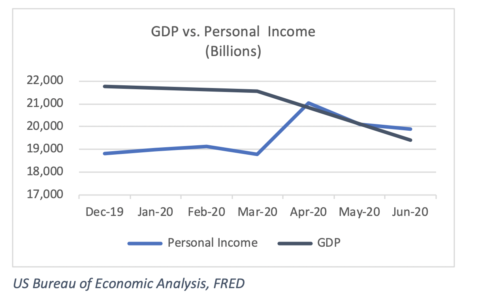 Congress is working on the next in its series of stimulus packages. We remain confident that they will reach a deal, but watching the sausage get made is rarely fun. As of this writing, Republicans and Democrats appear deadlocked. To date, Congress has tried to address the economic impact on households in three primary ways: 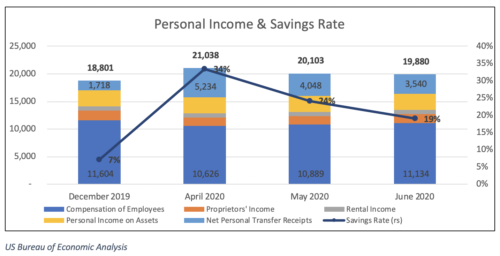 So far, these programs have worked as advertised. Despite the significant decrease in GDP, employee compensation has declined by less than 4% since the end of 2019. Additionally, the increase in transfer payments has more than made up for the aggregate loss.

This spending is not making its way into the economy, however. In April and May, when the majority of the $1,200 checks were issued, households saved 34% and 24% of their total income, respectively. The savings rate now stands at 19% – more than 2.5x the pre-pandemic level. Arguably, there have been fewer places to spend over the last several months with dining, traveling, and shopping in stores largely discouraged. However, if the policy goal of the transfer payments is to smooth rather than defer the impact of the recession on households, we will need to see consumer spending pick up.

While lawmakers could use the tax code to encourage more household spending (i.e. deductions for dining, entertainment, or travel), the current issue is one of consumer confidence rather than disposable income. We hope that policymakers use their platforms to put sensible public health measures in place to give consumers the confidence to leave their homes again.