The Federal Open Market Committee (FOMC) delivered a 25bps interest rate hike last week that was largely in line with expectations.  This marked only the third interest rate hike since the financial crisis ended 8 years ago, in 2009, pushing the federal funds target rate to a range of 0.75% to 1.00%.  The market’s reaction was seemingly counter-intuitive.  For example, bond yields dipped, the dollar declined, and equities rose in the aftermath of the announcement.  This decision was widely telegraphed by Fed officials over the past several weeks and, perhaps, investors decided to sell the rumor and buy the news.

We note that there were a handful of dovish developments observed in the FOMC’s statement.  For starters, the Fed left unchanged the number of projected hikes for the full year at three.  In addition, Minneapolis Fed President Neel Kashkari voted against an increase.  Lastly, the FOMC changed the language in its official statement, saying that the Fed was looking for a “sustained” return to 2% inflation and that its target was a “symmetric” one.  The perceived underlying message here is that the Fed is willing to let inflation drift above 2% for some amount of time.

What this means to us? – Investors were pleased by these developments.  It appears that future changes to monetary policy will be deliberate and that the FOMC is in no hurry to push monetary policy from current accommodative levels into restrictive territory.  This would be positive for stocks relative to bonds as monetary policy would remain in a sweet spot despite gradually rising interest rates. 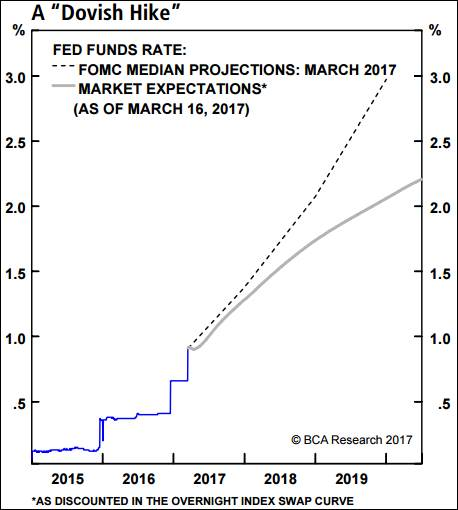